Danger awaits on the nicest of days in Hawaii

November 16, 2014
The truth is, someone dies every few weeks while having fun in Hawaii. The demons are not  powerful volcanoes, tsumanis, earthquakes, and hurricanes, but rather  ‘booby traps’ that lie along the beaches and trails on perfectly nice days.  The good news: Almost all  recreational deaths in Hawaii can be avoided.

Rule one is to stay on the trails. You can be walking along in lush greenery like this and step off the trail to take a picture, and …

… get an airborne view like this as you freefall. Greenery disguises drop offs. The lush forest also can become a maze without exit. Forget about using GPIS to find routes. Stay on the trail and don’t venture into the forests. Getting lost is fairly certain, and unseen earth cracks and lava tubes provide trap doors to deep dark places. (On the other hand, don’t fret about poisonous insects or snakes since there are none in Hawaii.)

This scene hardly looks life threatening and this local surfer is reading the waves with experience. But rogue waves easily sweep people from rocks, so observe the wave action for many minutes  before venturing out. Don’t walk out on wet rocks. On a given day, if normal surf is breaking near where you are standing, then a ‘rogue’ wave—one larger than the normal sets—will be in postition to take you out. Bigger surf also means stronger rip current. All that water pounding in has to go out someplace. In a small bay like this, don’t swim out until you know where the rip current is. 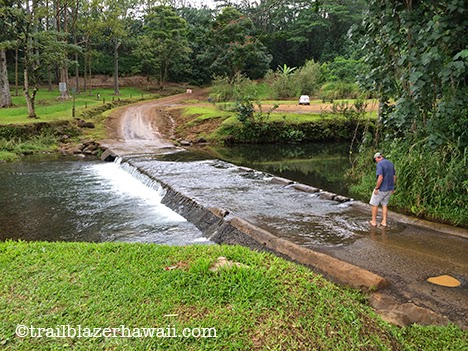 This spillway feels good on the feet on a day like this. During rains (and it can be raining in the mountains when it’s dry nearer the coast) streams rise quickly to flash floods that take away hikers and even cars. Stay out of stream valleys during rains and head for high ground immediately if you hear what sounds like a jet engine coming down the gorge. Don’t cross fast moving water; if you get caught on the wrong side, wait until the water lowers before crossing.
And, most of all, don’t forget that the most popular way to die having fun in Hawaii is drowning, often from head and neck injuries caused by wave action or fatiguing in a rip current. Again, stay out of big waves and back from the shore. If you get caught in a rip current, don’t swim against it. Rip currents are near-shore events that will release you behind the waves. Swim in a direction perpendicular to the force of the current. Avoid swimming at remote beaches, where no one will see you from shore.
The Trailblazer guides for each of the islands list the specific dangers associated with particular hikes and beaches, and also have sections on recreational safety and hidden dangers. No Worries Hawaii, a vacation planning guide, has a chapter on how to play it safe on vacation. You don’t have to wuss out and there’s nothing to be afraid of. Adventure awaits. But many people do die in Hawaii on vacation and you don’t want to be one of them.
One last tip: Retractable hiking poles fit easily into luggage and can be a lifesaver in Hawaii. Use them to probe greenery, for stability on stream crossings, for rock hopping on wild coastal routes, and, most importantly, to provide braking when coming down steep, narrow ridge trails that can be as slick as snot after rains.
19.896766 -155.582782
Hawaii, USA