Kauai’s Hanalei no ka oi (is the best) 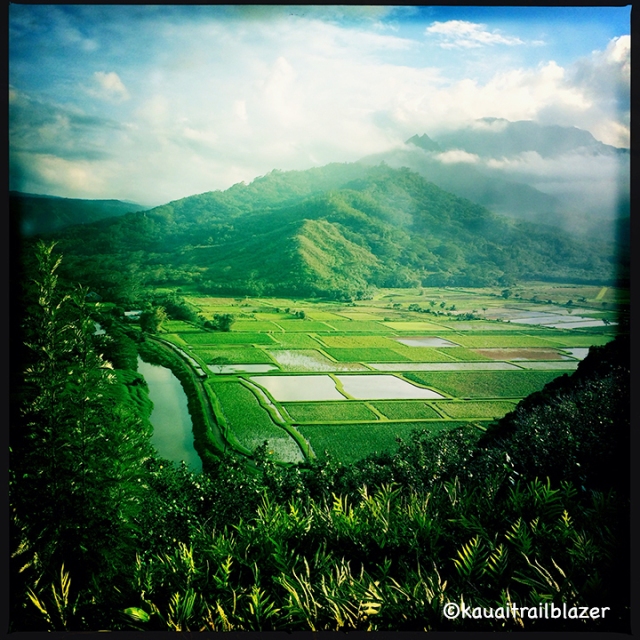 One look at Hanalei from above (in this case, from hidden Hanalei Organic Park in Princeville on the north shore) and you will be hot to get down there and look around. Taro fields flank the Hanalei River—part of a National Wildlife Refuge—an opportunity for a long, mellow kayak adventure. Several companies offer rentals. A mountain hike (the Moonshine Trail) is a pleasing and exciting alternative to the Kalalau Trail, the popular excursion just down the highway. 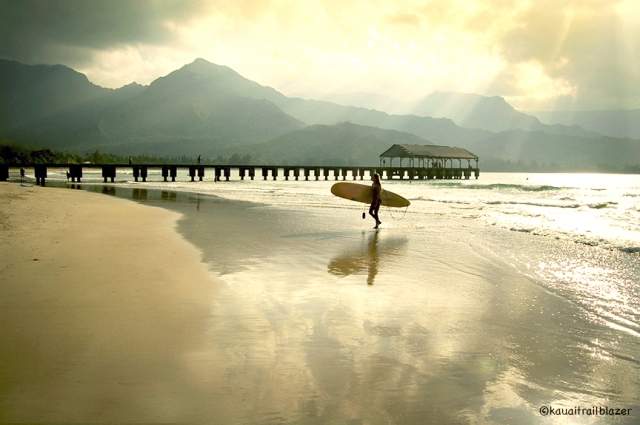 Black Pot Beach, at the far end of Hanalei Bay, presents some of the best beginner surfing in Hawaii. Lessons are available, right there. Beyond the shore are some big-boy waves, at Bowls and Queens. Farther out is Kings, which only breaks when waves are epic. Local legend Titus Kinimaka first rode that monster in the 1990s.
In the middle of the bay is Pinetrees, home beach for pro surfer Bruce Irons and his late brother Andy, who was a world champ. The takeaway: Hanalei is Surf City on Kauai, and one of the top venues in the state.

Hanalei Pier has been the darling of many movies. Most recently, George Clooney walked by in the Descendants. The boathouse on the end of the pier is a box seat to watch the near-shore surfers, and to admire the jagged rim of towering mountains that frame the scene. 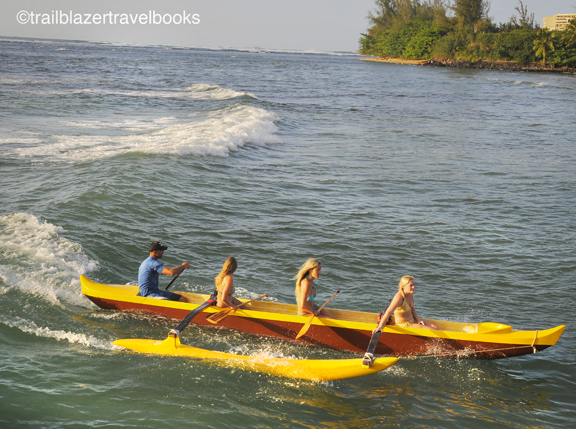 The two-mile sandy shore of Hanalei Bay is just a few blocks from the quirky shops of Hanalei Town—maybe the best walk-around beach town in Hawaii, with galleries, bars, restaurants, and giftshops. On the green fringes of town is the Waioli Mission House (below), built by the Wilcox family in 1841. Hanalei is not flashy, but normally millionaires and a few Hollywood types will be shuffling around in flip flops among other sand-footed and sunburned tourists. This place can get you hooked on Hawaii for good. 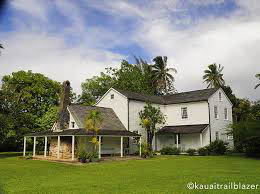 More details on Hanalei, and other stuff nearby, are in the 20th anniversary edition of Kauai Trailblazer, released last month.

← King Kamehameha never had it so good: Have a Royal Hawaiian celebration without breaking the bank
Oahu’s Ho’omaluhia: From the gates of Hell to the Garden of Eden →